H. E. Jes Brogaard Nielsen, Ambassador of the Kingdom of Denmark to Bulgaria, visited TITAN Zlatna Panega's plant. During his visit Ambassador Nilsson discussed with Adamantios Frantzis, General Manager of the company, the strategy for climate change mitigation, a top priority in the activities of the world leader in cement production TITAN. For one year, TITAN Bulgaria has reduced the specific emissions of carbon dioxide by 4%. At the same time, the company in Bulgaria reaches the highest rate of substitution of conventional (fossil) fuels with alternative fuels, which consist of more than 30% carbon-neutral biomass.

H.E. . Jes Brogaard Nielsen was accompanied by representatives of the Danish company FLSmidth, which is a leader in the production of equipment for the cement and mining industries. More than ten million euros have been invested in joint projects between TITAN Zlatna Panega and the Danish FLSmidth, a leader in the cement and mining industry. For more than 13 years, the company has been a partner of TITAN Zlatna Panega. In the last few years, both companies have continued to invest in innovation and digitalization of production processes. They have implemented a series of successful projects that increase the efficiency of cement production. Long-term efforts are invested in the company's engineering staff's training in regular inspections and analysis of the production process.

The Green Deal is one of Europe's most ambitious plans to reduce the impact of human activities on the environment and climate change. The green deal is more than just an environmental plan. It seeks to transform economic activity into a circular one, through the necessary regulation. The cement business is an integral part of this process. 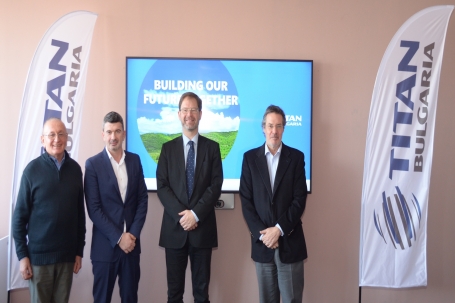